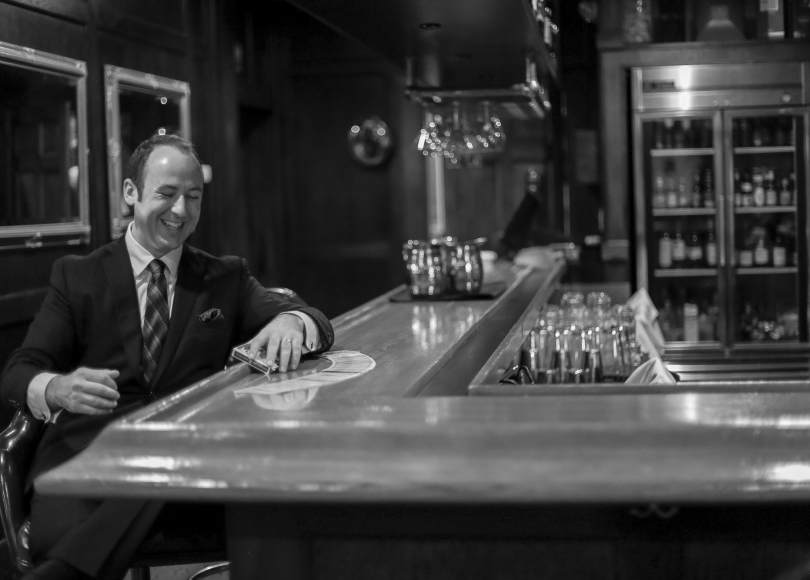 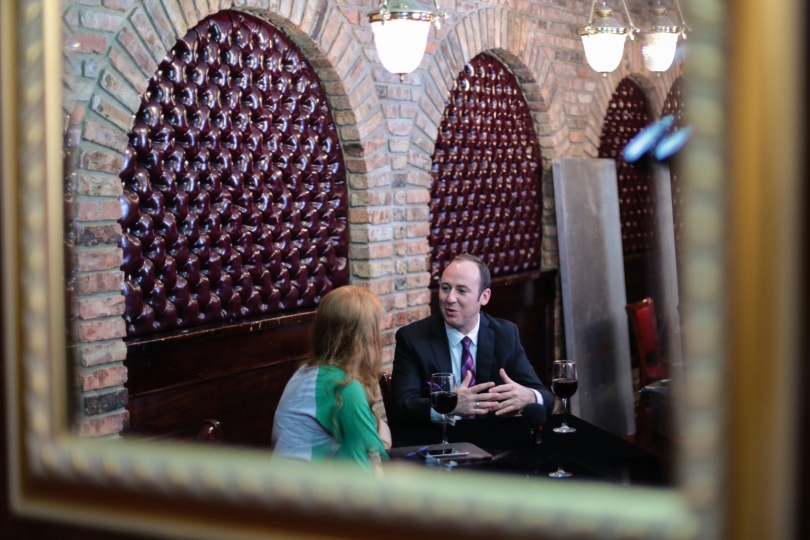 On October 29th I had the opportunity to sit down with magician and motivational speaker, Kostya Kimlat. I got to hear about his fascinating life, from growing up in the Ukraine to immigrating to America at the age of nine. While Kostya is known by many for being a talented magician and a contestant on Penn and Teller’s Fool Us, he is also an overall inspiring person with a message for all of us. His zest for life, kind demeanor, and optimistic attitude are nothing short of amazing. My conversation with Kostya challenged my own way of thinking and made me see the world from a completely new perspective. I hope you, too, can have your perspective transformed.

I read that you were born in the Ukraine, tell me more about that.

I was born in the Ukraine and lived there until I was nine years old. During that time, the Ukraine was under the Soviet Union and was a communist country. As communism was lifted my family applied for visas, which was done by a lottery. In a few years we received our visas and immigrated to the US.

What led your family to immigrate to the US?

There were many reasons my family wanted to immigrate, one in particular was the Chernobyl disaster. Many young people today have never even heard of Chernobyl and it was a major catastrophe. We left our home for several months when I was three years old, and years later there catastrophic results of the radiation were seen in the children being born with extra organs and limbs. That was definitely a driving force for wanting to leave the land.

What was it like growing up in a communist country?

I remember vividly standing in line when I was seven to get a ration of milk and bread. Each family received one gallon of milk and one loaf of bread. I grew up in bad times. My family had nothing and no resources, but even then, I remember thinking life was wonderful and beautiful. It taught me how important family is; they were the ones that made life so good. 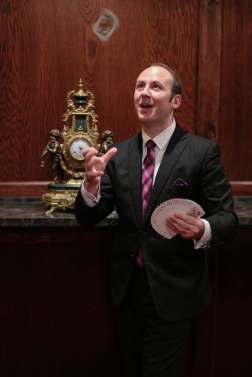 Were you excited to immigrate and how did that transition go?

Absolutely! For two years, my family planned on moving to America, so I would dream of what my new life would be like in America. I can’t imagine living in any other country. Where else can you create an entire business around magic?

The transition was not too difficult; I had already been learning some English in school. I grew up speaking Russian, so when I first moved over, I was having trouble with connecting words like “of,” “or,” and “the.” So I used to watch TV to learn English. I would watch lots of cartoons and put on closed captions, which elevated my reading and spelling abilities and made my learning even faster.

What do you think you have carried over culturally or ideologically from growing up in a communist country?

Having lost family in the Holocaust and having family survive through World War II, I can appreciate that we had nothing and if it ever happens again that everything will be fine. If you have nothing, it is really okay and you can get by with it. In the Soviet Union, it was such harsh times for so long that people took it as the new normal. From that experience, I have somewhat of a survival instinct.

You mentioned family dying in the Holocaust and living through World War II, can you tell me more about your family history?

My parents never sugarcoated our family history and believed it was important to remember our history. History has the ability to repeat itself and we must learn from the past to prevent it. Not only did I have family die in the Holocaust but also some who died under Stalin who was starving the people and sending them to work camps. I learned the history of my own city which was where the Babi Yar massacre took place, where they made Jewish people dig a gravesite and then shot them all. I also grew up hearing stories of the family members who fought as Soviet partisans against the Axis forces during World War II.

Tell me about your high school experience; where did you fit in?

I grew up feeling like a bit of an outsider since I came from the Ukraine to America. Sometimes I felt I was in between two cultures; I wasn’t completely Ukrainian nor was I completely American. High school was better than I perceived it to be. I perceived it to be that I am the outsider and that I am a geek and just trying to get by. However, I was friends with everyone because I did magic and everyone wanted to see it. So I was never really a part of one particular “clique”. I often thought I was not well liked but now I realize that came more from my perception and was not necessarily the reality.

How did you get into magic?

Around 7th grade I did a book report on Houdini. I was watching World’s Greatest Magic specials on NBC and became obsessed with magic. I would record the specials on a VHS tape and would watch them over and over again. I began learning tricks and would perform all the time: at school, for friends, for my family, you name it. I started creating my tricks and routines and I loved sharing what I was learning and teaching others. When I was 14, I started my own online newsletter. By 18, I wrote down a collection of tricks I had created and got on a bus and did my own lecture tour. At the time, I just thought that’s what magicians did. I had been a part of a magic club where lecturers came and spoke, so I figured I was supposed to go and lecture. 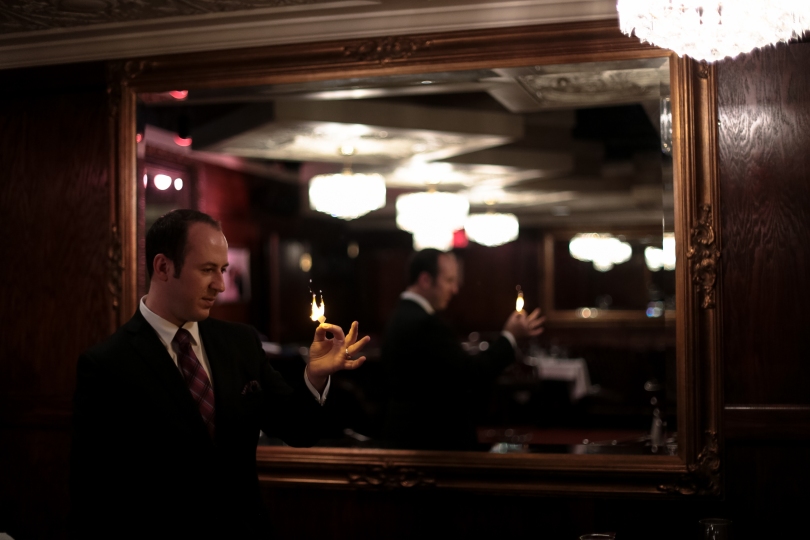 At 18! That’s incredible! Not many people start lecturing at 18.

You know at the time I didn’t know any better and I really thought that’s what you’re supposed to do. My parents just waved me off, and off I went for a couple of weeks. I had contacted clubs around the country and used a greyhound bus to get from place to place. I went first from Orlando to New York, then Baltimore at Denny and Lee’s, and then to local magic clubs in Richmond, VA, Peoria, IL and down to Huntsville, AL. It wasn’t until I was older that I realized what I did was not the norm.

You said you are Jewish; did you grow up going to temple?

I did go to temple and had a bar mitzvah at 13. I was the first one of three generations to get to have a bar mitzvah. One of the reasons my parents had moved over here was for the freedom of religion, so it was a very special moment for me and my family because they didn’t have that same opportunity when they were growing up.

In what way do you bring in your own personal philosophy of life into your shows?

First, I like to point out that it is amazing that we are all here at this show together. Everything could have been different or we could have all been somewhere else, but here we are together in this room and that is incredible. What I love about magic is that it puts religion aside, it puts language aside, it puts everything aside and all that is happening is the interaction between us. At first, when magicians are starting out, a performance is all about them and how they do, but over time, you learn that the focus should be on the audience. So my goal when I perform is not to make it about me and what I believe but put the focus on the audience and make them aware of their belief systems and how we are fooled. What I am really interested in now is helping people understand how their brains work, how we perceive situations, how we analyze them, why we make the decisions we do and to be aware of why we make mistakes in thinking. Often, we are so busy doing things we never stop and realize that we are programmed to respond in certain ways. Magic has helped me slow down and evaluate life more. If a very simple trick can fool me, then how else am I being fooled in life?

If you were to leave one last bit of advice to listeners what would it be?

Don’t be afraid to believe that things are going to be good. When we focus on the future and we know what we want it to be, we often become afraid that it will not happen. This fear ends up limiting ourselves. What I have found is that you have to trust yourself and imagine the future you want and slowly move towards that. You will have bumps along the way but eventually you will get there. And lastly, try to not stress the journey as much.

If you want to know more about Kostya check out the podcast where we go more in depth on these topics here:

Kostya also has his own personal blog where he writes on many of the topics which you can find here: Think Like a Magician™.

And if you would like to submit an article to Sleighted, email us at submissions@sleighted.com.