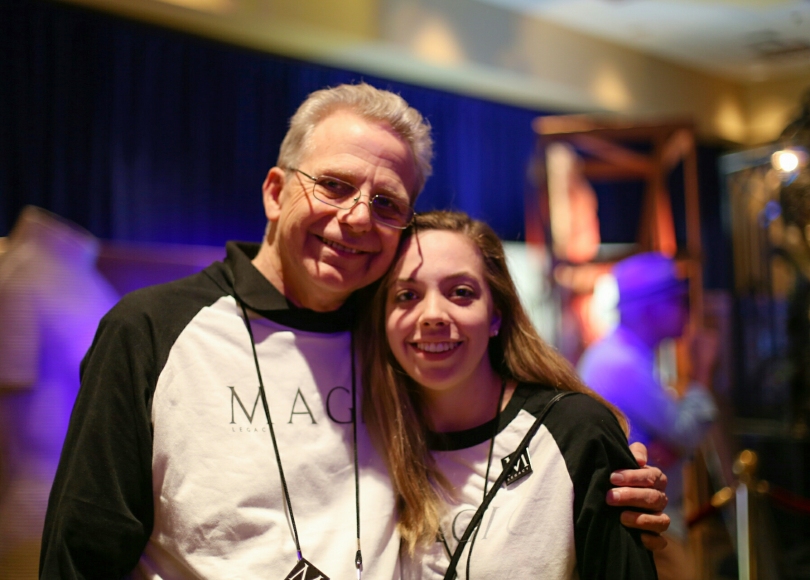 Every child grows up hearing a lot of stories. They often start with “Once upon a time…” and end with somebody living “happily ever after.”  Growing up around magic, I had the opportunity to meet a lot of interesting people. While I did eventually tire of picking a card, I always liked hearing a good story. I have reached out to some of the funniest people I know and asked them to share a story or two. I hope you enjoy. 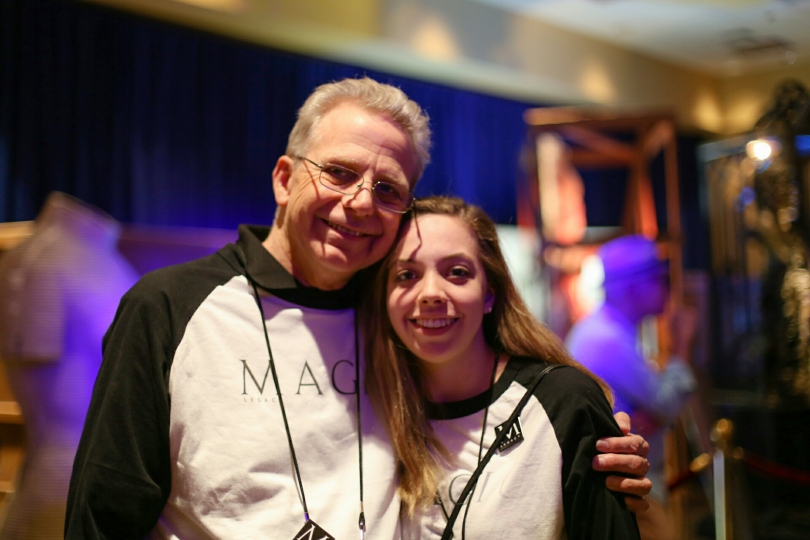 I first met Stan Allen back in 1994. It was about 5 a.m. on a Monday in March. I don’t remember much of the introduction, but I hear it was really something. Fast forward twenty-two (and three-quarter) years, Stan is known as the publisher of MAGIC Magazine and producer of MAGIC Live! I know him simply as Dad.

There are many advantages to growing up with a magician for a father. You never have to worry about finding entertainment for your birthday parties, though you should insist that they pick you as their volunteer (I’m not bitter). Any time you get a magic trick in a kids meal, you don’t even have to bother reading the instructions. And when you’re in high school and have to build a catapult, your dad can call up his buddy who just happens to build illusions to help you out!

Another perk was being able to come up with the most creative ways to do things. When I was in Girl Scouts my troop had a bake sale, where each girl and her dad would make a cake and the families would bid on them. My dad and I decided to recreate one of the most famous magic tricks of all time. One doll head, two doll feet, and a tin foil saw later, we had the most amazing Sawing a Woman in Half cake ever. While my troop leaders were a bit concerned, our cake seemed to be a huge success with everyone else. 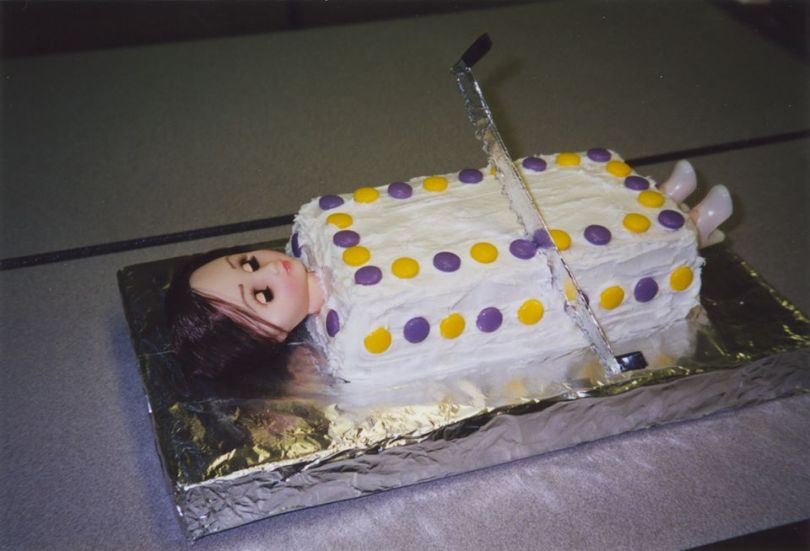 However, my favorite part of growing up with a magician dad was hearing those hilarious stories. One that is especially fun for me to hear is how a Vanishing Birdcage landed him in jail. (What kid doesn’t want to hear about a time when their parent got arrested?)

When my dad was a teenager, he was a member of the Long Beach Mystics, a junior magic club in Southern California. The Mystics were not like other magic clubs. They didn’t just meet once a month. They were a group of close friends who did everything together, including pulling some crazy pranks.

Somebody came up with the “genius” idea to use a Vanishing Birdcage to sucker people into doing a little dumpster diving. The idea was simple. Wearing the cage, you’d walk up to a trashcan, the kind with a dome lid and a little swinging door, and “put the cage in the trash.” The mere action of reaching inside the trashcan did the dirty work, and it was all under the cover of the lid. No real skill required! (Magicians, you know how it works. Muggles, sorry, I’d have to kill you.) After what looked like throwing a birdcage, with a bird inside, away, you’d turn and leave with your hands empty, hoping to trick someone into digging through the trash looking for the “little gold cage with a bird in it.”

Just picture this: four teenage magicians dressed in suits, walking along a rather seedy part of Long Beach called The Pike. One of these magicians had never vanished a birdcage before in his life. My dad, at the wise old age of fifteen, was thinking, What could possibly go wrong? That’s when a police officer walked right up to dear ol’ Dad and asked, “Is that one of those little birdcages that you pretend to put in the trashcan, but it actually (exact description of method goes here)?” For once in his life, my dad was speechless. It seems that some other magicians were pulling the same prank a week before, and this officer had fallen for it. (Can you imagine what his life was like at the station that week?) This cop was a good sport about it, and they all shared a laugh.

But that’s not where the story ends.

The boys had fun for the next few hours at the expense of innocent bystanders. On the way back to the car, Little Stanley was lingering behind, running into souvenir shops, diners, and other establishments along the way, looking for any opportunity to “leave the birdcage behind.” His last stop turned out to be a pool hall. After going into the back with the cage and heading out the front without it, the no-nonsense cashier threw a stick across the opening, blocking his way out, and said, “Go get it.”

Feigning innocence, he asked, “Get what?”

And so he did. If he had just walked out the door with “the bomb” in his hands, all would’ve been fine. But no. He had been practicing with this all night. Now, it was showtime. In one swift motion, he vanished the cage with a clap of his hands. Flawless execution! (So he says.) But his moment of glory was cut short by the cashier screaming that it exploded! A few seconds later, two police officers arrived, neither of whom had experience with birdcages.

A few hours later (3 a.m. to be exact), my grandfather (a retired naval officer) was getting a phone call to come get his son out of juvenile detention. Fortunately, he was written up for “being out past curfew” instead of “harassing a cashier.”

That was in 1965, and I think just last year, my dad finally got off restriction.

(Photos of Katie and Stan creating the cake) 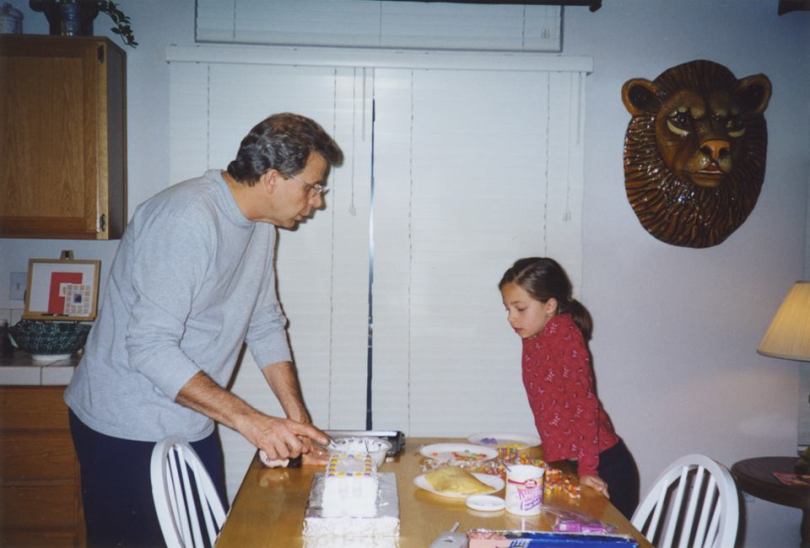 And if you would like to submit an article to Sleighted, email us at submissions@sleighted.com.

Get Connected with Katie: