The Sleighted Team aims to be a single source of news and information about all things magic. Our goal is to be a one stop shop to get product reviews, in depth interviews and interesting articles on magic related topics.

Sleighted is an independent company striving to offer a platform for magicians to have open discussions. We intend to offer creative and relative content that engages our audience and provides a direct line for magicians to communicate with us and each other. What sets us apart is our premium content offered with no subscription fees and minimal advertising. We value our reader’s feedback and hope you will join the conversation with us.

At Magic Live 2016 Stan Allen announced that Magic Magazine would be shutting down at the end of the year. Stan mentioned that in the past decade print media has lost popularity and that people prefer digital content. After the announcement, the three of us, Erik Casey, Chelsea Nichole and Jay Temaat, began talking about how the closing of Magic Magazine would leave a big hole in the magic community and we wondered if anyone would step in and create a digital magazine in place of it. As we discussed this we realized we had a passion for magic and each possessed unique skills that were needed for launching a digital publication.

On August 16, 2016 we had our first meeting to start planning out what our goals were and how we could launch a company together. We decided we wanted to have a video show, podcast and articles and we aimed to launch January 1, 2016. Over the next months we worked hard to get as many interviews completed before the launch. We look forward to see how our publication will grow and develop in the coming years.

Erik Casey started magic at 8 years old and published his first effect at 19. He has been heavily involved in the magic industry since then. Erik is now the host of the Sleighted Show with Sebastian.

Get Connected with Erik:

Chelsea is the host of the podcast and editor in chief of Sleighted. She finished her Master’s in Counseling in 2015 and also works as a private math tutor. She has been published in Arise Magazine and Mutuality Magazine. 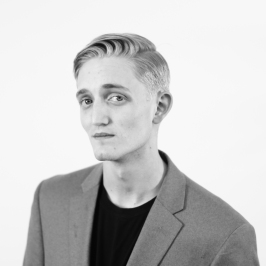 Originally from Oslo Norway, Sebastian is a professional magician living in Orlando Florida. He is currently a featured performer for SeeMagicLive and host of the Sleighted show alongside Erik Casey.

Get Connected with Sebastian: