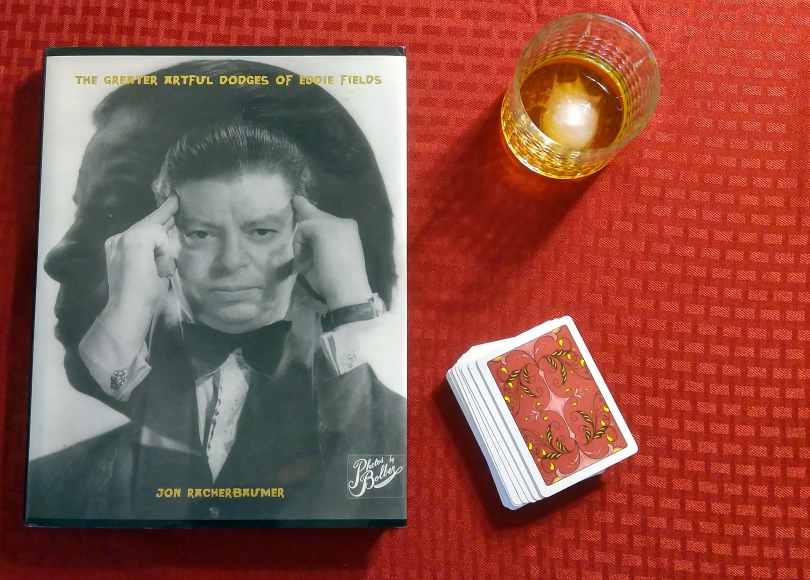 Ryan Schlutz joins the Sleighted team to review some of magic’s greatest books. Check out his review on the classic The Greater Artful Dodges of Eddie Fields by Jon Racherbaumer.

“MORE NOTES ABOUT THE ARTFUL DODGER

First of all, I want to thank Ryan for his lavishly enthused review of the GREAT ARTFUL DODGES.

In a way, Ryan’s energized commentary mirrored the energized responses I experienced when I first met and experienced Eddie Fields over fifty years ago.

When Eddie showed me things I had never seen or experienced before, what I ultimately felt was a seismic shift in my consciousness. When something like this happens we seek metaphors to capture the uniqueness of such an experience. We seek dramatic images. We search for strong words: Blown away. Fried. Destroyed. Yet my mind remained serenely intact that fateful day. I didn’t feel like I had been the victim some kind of ultimate mindfuckery. Instead, I felt grateful and special. Eddie, in his inimitable way, made me aware of a powerful secret—not secret in the way magicians consider it. It wasn’t about how tricks work. It was much more subtle than that. Eddie revealed how subtle subtlety could be. Everything he did seemed effortless and deeply mysterious—the way real magic should be done and experienced. There were no rings, strings, magnets, or mirrors. There were no moves of fascinating suspicion. Everything looked natural. And even after Eddie showed me how certain things worked (on the surface), he confided: “That’s only 10 % of it.”

Needless to say, meeting him was a life-changing experience.

After our first encounter I asked, “Do you have this stuff written down somewhere?”

I was flabbergasted.
I cried, “Are you kidding me? You must preserve this stuff!.”

He shook his head. Then he said something that changed my life.

I sputtered and said, “I’m not a writer! (This was true!) I barely read books other than those about magic. I wouldn’t know where to begin…”

Despite not knowing exactly how I was going to write anything, I knew I had to try. I desperately wanted to preserve this legacy. More importantly, I wanted to find out more about the subtlety of subtlety.

And so it began…and the result was a kind of sketchy, heartfelt notebook, fueled by an enthused amateur.

I printed a few hundred copies of this notebook and it sold sporadically. I lost money. However, Tannen’s liked it and reprinted it in its amateurish, original form.

I have no idea how many copies they printed and sold. Few reviews appeared, but none of that mattered. What mattered to me was SOMETHING got written and preserved, and I wanted others to ride the same wave that took me to places I had never been before… I wanted them to feel what I felt.

This is why years later I was thrilled to write a more detailed, expanded edition. It gave me another chance to capture what is probably forever ineffable yet somehow has the power to inspire one’s innate creativity while motivating them to understand the many layers of mystery.

As it stands today, I’m still trying to capture what lies under the all of the appearances we assume is Reality. Of course I’m still learning how to write, using words (“containers of consciousness”), putting them into sentences, arranging them into paragraphs, and finally putting the result into books.

I think Eddie would have agreed. He might not have said so. He would have simply grinned or chuckled in the quiet way he did when he goosed the genie that tumbled out of the bottle.” -JR

Click here to stay up to date on all things SLEIGHTED!